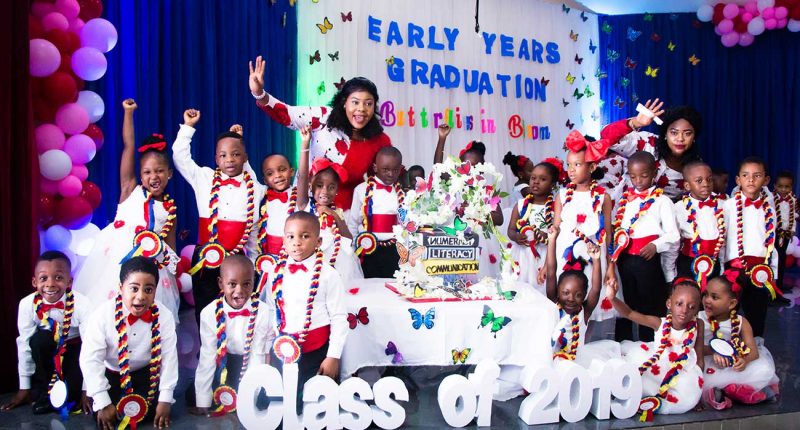 It was all red and white in Start-Rite Schools on Tuesday, 16th July 2019, as children were dressed stunningly for their big day, as the Early Years Reception Class celebrated their graduation to Year 1 Primary School. The bar was set very high with the theme, ‘Butterflies in Bloom’.

The children gave amazing performances to a packed house of parents, relatives, friends, and teachers as they celebrated the children’s hard work and achievements over the past four years.

The reception class turned reporters to present Newsround of school news and events including their very own weather girl.  The news anchors did a very professional job of updating us all of which also included entertainment news and outside ‘roving’ reporters who interviewed teachers and parents after various events. A performance that received a standing ovation.

Supporting the Reception Class, Playgroup Diamond gave us a delightful insight into their ‘Circle Time’ as they sang their songs and danced whilst learning.

This was followed by Pre-Nursery with their drama ‘Dignity in working together’ based on this term’s living value ‘Dignity’.  The ‘cutieful’ flower and bee costumes which blew everyone away as they told the story of how the sun and rain have to work together to make the flowers grow.

Nursery Emerald and Ruby sparkled like jewels as they educated us competently by speaking on the meaning of  ‘Dignity’.

No event would be complete without the Early Years African Dance and Drama presentation who showcased native attires of  Nigeria representing the different cultures, as well as welcoming the spectators in the four official languages of  Nigeria;  English, Hausa, Igbo, and Yoruba.  They really catwalk like supermodels even at this tender age.

The Early Years Ballet Club presented a beautiful and elegant dance to the tune ‘Little Butterfly’.  The budding ballerinas looked so dainty in their little pink tutus adorned with butterfly wings.

The reception children demonstrated they were more than ready for the ‘next level’ by giving impromptu lessons on how to add and proved this by doing simple arithmetic using parents to represent the numbers and showing how they arrived at the answer. They followed this up with a demonstration of their reading abilities. The children then went on to proudly recite two charming poems about leaving Reception Class and another called ‘Bright’.  They ended with a  wonderful performance of the song  ‘Ready to Go’ as parents and teachers watched with slightly moist eyes and a lump in their throats as the children sang and danced for the finale.

Their reception class teachers, Mrs. Nnenna Elvis Moffoi and  Mrs. Abigale Eyiaro were equally proud of the children’s achievements.  They had worked very closely with the children rehearsing in preparation for the big day for a number of weeks. The children have been so excited about the ceremony and they did themselves and Start-Rite Schools proud as they were officially promoted to Year 1 by the Principal, Mr. Philip Reynolds who presented them with graduating medals and a book.