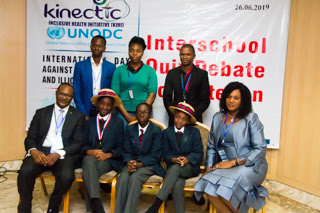 The competition was put together to mark the International Day Against Drug Abuse and Illicit Trafficking. The Start-Rite Day Secondary team made up of three students competed against five schools making it through the first round, which was the quiz competition, qualifying four students for stage two, the Speech contest.   After this came the debate on the topic “Drug Abuse: A Health Issue or Criminal Issue”.  The Start-Rite team’s argument for “Health Issue” got the school the award for the third position.

The students were recognised particularly for their speaking abilities and impressed the judges with how articulate they were in speech and debate.  This was the Secondary schools first attempt in this competition and students had been given limited time in which to prepare.